STORTREGN Sign With Black Lion Records For Special Re-Release Of ‘Evocation Of Light’! 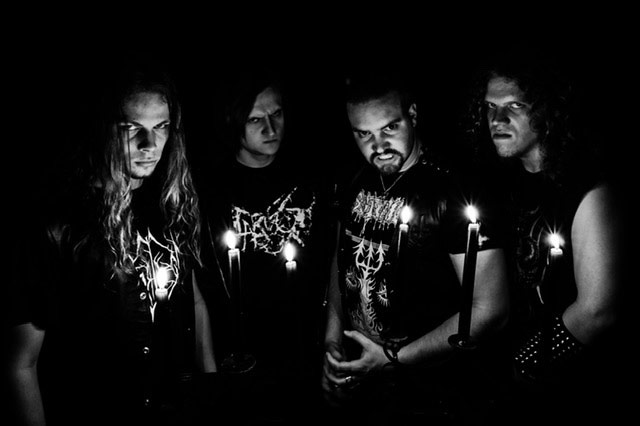 Swiss Blackened Death metallers STORTREGN have partnered with Black Lion Records for a special re-release of the band’s second album ‘Evocation of Light’.

Black Lion Records stated:
“We are pleased to announce that we have formed a alliance with Swiss Blackened Death Metallers STORTREGN in order to unearth their back catalog namely their second full length Evocation Of Light which will see its new treatment on CD And Limited Digipak\merch. The time frame is set for All Hallows’ Eve 2020 release once again! We are looking forward to seeing our collaboration begin!”

Adds the band:
“We are very proud to announce the signing with Black Lion Records for the special re-release of our 2013’s classic “Evocation Of Light”. The re-release will also feature special content and some hidden lost gems from the past!”

Stream ‘An Evocation Of Light’ here:

EVOCATION OF LIGHT tracklist:
1. Inner Black Flame
2. Epitaph – An Evocation of Light
3. Between Shadow and Soul
4. Negative Theology
5. Moonshade
6. A Mournful Saraband
7. So Much Dust
8. Thoroughfares
9. The Call

STORTREGN is a blackened death metal band, formed in Switzerland in 2005. Initially influenced by the Nordic black metal scene, they have expanded their vision and sound into a more contemporary era. They are greatly appreciated for their music and even more so for their live shows. With a relentless energy, they deliver a mix of charging riffs, blast beats and brutality that leaves the audience with a lasting impression and begging for more.

After a deluge of gigs, including Wacken, Metal Days, and 4 international tours, Stortregn has become inevitable in the Blackened Death metal scene. Their fourth album, “Emptiness Fills the Void” came out on May 25th, 2018 via Non Serviam Records. Moreover, with the recent signing with ALPHA OMEGA Management Agency, Stortregn are now planning to tour the world intensely. The band recently finished their European tour with IMMOLATION & FULL OF HELL (March/April 2018), furthermore STORTREGN toured Europe with MARDUK in December 2018, and there is far more to come. Expressing this album through live performances with violence, blast beats, and killer riffs is what the band is about.

At each of their thunderous live appearances, Stortregn ravage the place until the smallest shred of human skin is marked. The five members, tight as a hungry wolf-pack, energetically release their inner storm to transform every show into a dark and metallic mass of death, with precision, quality and professionalism.