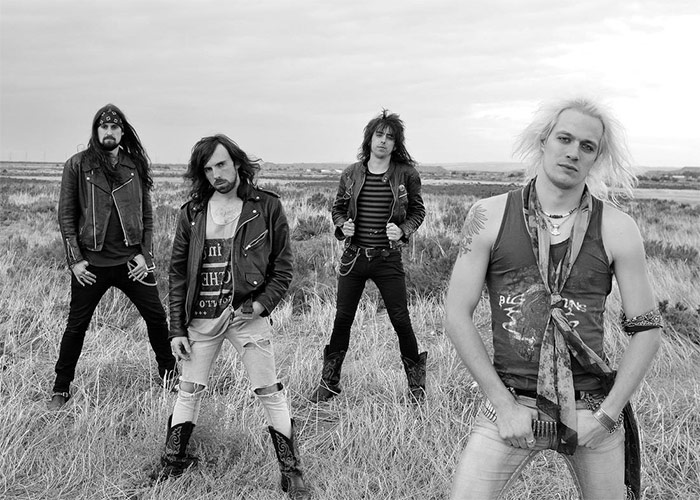 Aussie Hard Rockers Laced In Lust will be releasing their new album “First Bite” on February 26, 2021 via Rockshots Records. With a sound frequently described as a “Sleazy Status Quo” with the image of the “Sunset Strip”, Laced In Lust has been turning heads since their first show in April 2012. The 14 track debut album “First Bite” is a diverse record with some major sleaze elements to hold true to the genre, but also have some just good ol’ Aussie rock n’ roll tones with a slice of dirty blues.

“This album is full of blood, sweat, tears, and perhaps some other fluids! It’s been one hell of a party. With numerous EPs, it was the next logical step, but little did we know it was writing itself whilst we were giving it all playing live shows all over the world and meeting the most important members, the fans, supporters, our new friends. Which for me is who this album is really for. The events leading up, the love, the loss, the highs and lows, and all the experiences in between is what makes this album something I’m really proud of and ready to share with the rest of the world.”

Today, the band is sharing their third single “Hot Tonight” with a new music video, which can be viewed on Rockshots Records YouTube channel.

The single is also available for stream on Spotify.

Torsten Steel – Lead Vox/Guitar explains the story behind the track.

“I spent 6 months as the bass player for “Lagerstein” in 2018 for their Australian Tour. I actually wrote the song about their lead singer, Captain Gregarrr. At the time he was having a very hard time girl-wise…he might have had a few girlfriends all at the same time and a possible few more on the way haha. He was really drunk one night and crawled up on the couch next to me and we had a 2 hour drunk talk about his situation. Two lines were said that night that stayed with me and that was “it’s not about you, it’s about them” and “I want to promise them the world”. He’ll probably kill me after this, but hey at least you have a song about you now…right! Haha.”

For fans of Airbourne, Scorpions, Status Quo, Laced In Lust’s debut album “First Bite” will be available on all digital platforms as of February 26, 2021 via Rockshots Records.