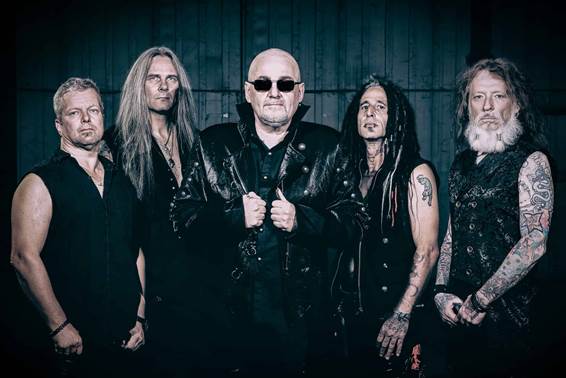 The year is 2020, a virus paralyzes us all and everything stands still. But suddenly and out of nowhere a new band makes its way into the limelight: BLACK & DAMNED … Damned, rising out of the dark and armed with the steely weapons of pure Heavy Metal! The two damned ones and prisoners of their passion are Michael Vetter with his sixstring axe (Ex-PUMP) and Roland “Bobbes” Seidel, who’s proclaiming his messages on the microphone.

And in their damnation, these two lost souls of the music industry have merged into a glowing and unstoppable unit. For their (soon to be announced and presented) first studio work, Axel Winkler (IHRESGLEICHEN) was hired for the drums and Axel Mackenrott (MASTERPLAN) handled the keys. And with Ali Gözübüyük (BIONIC ANGELS) as the fighter on bass and Aki Reissmann (PUMP) who swings the axe of rhythm, the army of darkness was completed and is now ready to be unleashed to the world of Metal!

Are you prepared to enter the dark with these damned guys?

Today we proudly announce the signing of a multi-album deal with BLACK & DAMNED and welcome the band in the ROAR! Rock of Angels family. More info about the band’s first full-length album, release date, track list and other details will follow in short!