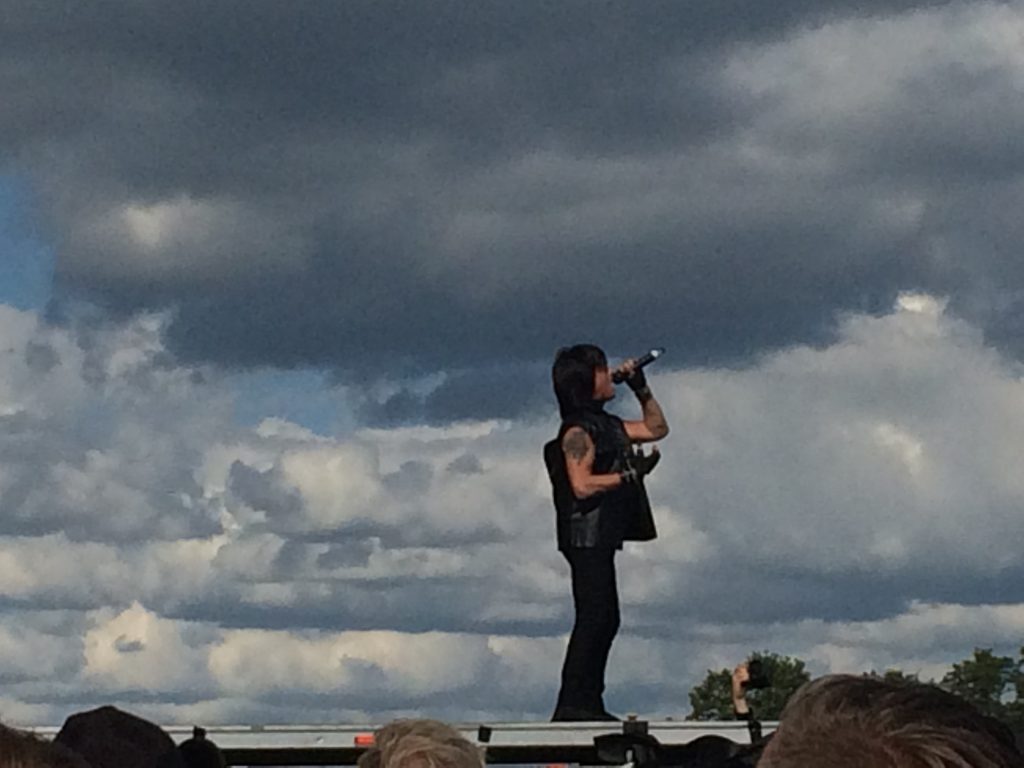 Who would have thought that when we first set foot on this picturesque corner of the Swedish south, we would be so in love with the whole experience that we would enjoy it for ten more years? Line-ups have changed, facilities have changed (always for the better), but what has remained unchanged is our enthusiasm for the absolute festival experience and everything that goes with it! And we are more than ready every year!

The first day of the festival, the so called “warm up” day, is starting with half of the stages on, plus one more, the smallest of all, which since last year is standing inside a big tent hosting smaller local acts and special events. The people are not that many yet, of course, since they are still gathering around the little village of Norje, enough though to bring on a strong feeling that the days following are going to be fabulous. However, the weather is not much of an ally. Due to occasional showers, especially in the evening when the big names of the day are performing, we couldn’t attend any acts except HELIX and then GRAVE DIGGER. About HELIX, we can say that they were ok, nothing special for our ears but not an unpleasant sight either. As mentioned above, the rain is a negative factor in order to enjoy anything outdoors. And then the mighty GRAVE DIGGER (our love for this band is not that objective) delivered a show worthy of their name despite the heavy rain coming down on our heads at the moment. Notice here that SRF does not allow umbrellas inside the festival area. The only way to protect yourself is by using a raincoat or trying to stay inside one of the many tents. Despite the great show we were watching we had to flee at some point and try to return home to dry hoping that this misfortune will end there and the next days would be shiny and warm…

After the necessary breakfast, energy levels are soaring (mostly because of glorious weather and positive forecast to be honest), and what would be more appropriate for a start than APOCALYPTICA? Powerful strokes, hair whirling, crowd joining in the ride and the result of all this is a most satisfied audience, ready to seize the day. We then have to deal with a common ”unfortunate” incident of such events, which is two bands we want to see playing at the same time, so we have to split! Hardline are playing at Sweden Stage and, given the disappointing previous performance a few years ago at this festival, we are ready to give them a chance to redeem. And they most certainly do! They sound better prepared, more tight together, more consistent and on the whole their show is one of the best of this year’s festival. Good job! One of the most anticipated acts for us because we didn’t until then have the chance to watch the legendary band with the new singer, is ICED EARTH. We had heard the most positive comments about his performance so it was a great pleasure to catch them at SRF. We weren’t disappointed at all. The comments we had heard about the new singer were, we could say, modest. This guy is just amazing and sounds as if he has been the main singer since the beginning. His name is Stu Block and definitely he is here to stay. We have to mention, though, that the whole band was amazing and their show was also one of this year’s best.

Late afternoon and we are heading towards Festival Stage to watch ALTER BRIDGE. Many many people are already in front of the stage so we found a good chance to enjoy the concert from a little farther back, on a platform that was placed between Rock and Festival stage on which we enjoyed the festival sitting and relaxing. That’s how we enjoyed the magnificent voice of Mr. Myles Kennedy and his good company, who were once more just fantastic.

The weather couldn’t be more cooperative, it’s a warm evening and Steel Panther are ready to take over. Nothing we didn’t expect, but that doesn’t mean we didn’t enjoy! Teasing, pleasing, cheesing, but also the level of musical skills is beyond compare. The only negative thing we have to say, was the directing (if there was any) of the cameras of the stage. The band was giving a show, but if you relied on the screens right and left of the stage for catching the details, you would have missed them! This problem remained for a number of shows on this stage. Also, an embarrassing moment was when singer Michael Starr kept asking the spotlight person to point at a particular place to no avail! After ten years of attending this best organized festival, it was the first time such mishaps occurred. We hope it was the last one, as well. Unfortunately, bad directing continued at the AEROSMITH show, which followed at Festival Stage. Of course, bands of this magnitude are not affected by these things, although those at a distance have their complaints. The performance in itself was top notch, powerful and incorporating the vibrant audience. They sucked everybody into the mood! Everybody’s hope is that this is not the farewell to Europe tour and that we’ll have the chance to enjoy them for many years to come.

The day begins with an act that has never appeared on an SRF stage before, but has long been anticipated: KIX. They were obviously happy to be there, too, because their show was anything a festival audience demands. Personal opinion, singer Steve Whiteman, was a little too shy and didn’t crack as many jokes as expected! Next up, THE DEAD DAISIES. John Corabi, Doug Aldrich, Marco Mendoza and co, take the stage and continue the party atmosphere. Next in our schedule is a band we had enjoyed back in 2008: RATT. Maybe we expected too much of them, maybe the previous bands had set the bar too high, the general opinion was that their performance was rather mediocre. Stephen Pearcy seemed to be a little too tired and not as energetic as we seemed to remember. Right after, we move on to Festival Stage for the day’s headliners, none other than SCORPIONS. Their performance, a fantastic audiovisual spectacle, proved the organisers right as to their choosing them as headliners and they are very much appreciated by the huge audience. After such an experience, one would go straight to bed, but RUNNING WILD are not to be missed. Unfortunately, the exhaustion of the day doesn’t allow for more than fifteen minutes of attendance and we would really much rather the organisers had placed them somewhere during the day. Anyway, we are amazed by as much as we were able to watch and sorry we couldn’t enjoy all of it.

Early wake-up today! For ages we’ve been anticipating to see Nightwish on the holy grounds of Norje, but this is turning into a summer night’s dream. So what’s the next best thing? AMORPHIS ladies and gentlemen, the one and only… Mister Esa Holopainen with our favourite Tomi Joutsen and their company just gave us what we were waiting for as always (although they skipped our all time favourite, The Smoke). Off to Festival Stage for THUNDER. Cider bottles in hand, sun block on skin and the show begins! Fantastic performance, although hits like River of Pain and Love Walked In were not included in the setlist, much to our disappointment. Small lunch break and we are back to see what the SWEDEN ROCK SYMPHONY ORCHESTRA is all about. For the first time, an orchestra of 48 musicians, a choir, FREAK KITCHEN, Mark Stanway (ex-Magnum, keyboards) and six guest vocalists all under the conducting of Ulf Wadenbrandt are here to perform only for us! Every artist performs two songs of theirs and at the end they all join forces to sing Thunderstruck. The idea is brilliant, all the artists exceptional, but again there are problems, organisationwise. The sound is quite bad, the bass and drum bass prevail and do not do justice to this great effort.

DARE are ready to go on Rock Stage, so we hurry to get a nice spot. The warm late afternoon is the best setting for the band, who make sure everyone is having a great time! The best concerts are those in which the band is really enjoying what they do and, in combination with fantastic tunes, they involve the crowd into the party. The DARE show was definitely one of those. Next, we are prepared to go back to the basics with SAXON. Some people just don’t age! A fantastic performance by veterans of the genre. The act we choose to close this year’s festival is TREAT. IN FLAMES are the headliners, but we prefer the former and we make the right choice. Although they play at a smaller stage, 4Sound Stage, they are in perfect shape, extremely good mood and create the best closure this year could have!

With the summer almost over and a long winter ahead, our reminiscence of those beautiful four festival days will keep us company, together with anticipation for the next one! This event is by all means something not to be missed!