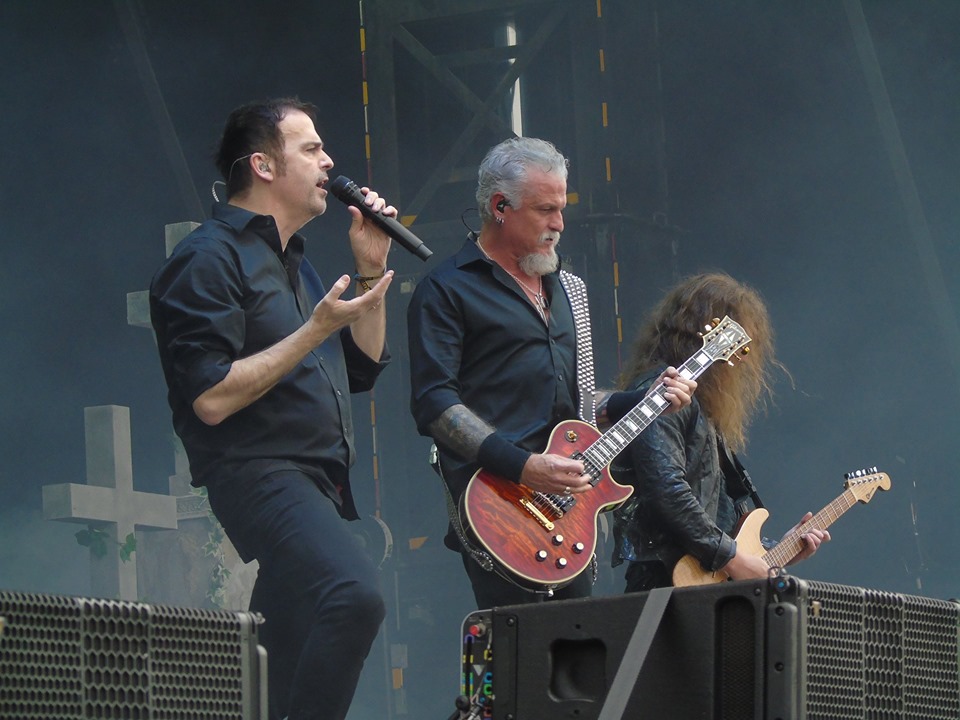 A few weeks after we have returned and recovered a little from what we experienced at that small corner of the south Swedish countryside called Norje, it is time to transfer to you a few things of the many that we have seen, heard and felt. To start with, organisation wise, this year many complaints were expressed by many people, even by the biggest fans of the festival, like us, regarding the large number of attendants. We started realising this on the first day of the so-called warm-up day where neither the whole festival area is open nor all the scenes are used. It was blatantly obvious that there was a larger crowd, which was actually commented as a positive thing. But this was only the beginning. The next day, when the festival is in its full glory, we understood that something was not going well. The queues were endless starting from the 2 entrances until the toilets, the food tracks and the merchandise kiosks. We began to suspect that it is impossible that there are only 35,000 people in the area. The situation became worse with the organisers’ decision to add security barriers in front of Rock stage as they did last year for Festival stage in order to create a gap between the crowd during a concert, basically splitting the crowd in left and right side. The reasons for this are perfectly understandable, but in this way they cut off the whole field in two because Rock stage is opposite Festival and the only way to go from one side to the other was a narrow passage of only a couple of meters between the sound booth of the Rock stage and the main bar where the sound booth and the barriers of the Festival stage started. CHAOS!! Imagine 35,000 people trying to get through it. Another issue we encountered was that on two occasions, when we tried to enter the festival (there was a separate entrance for media pass and vip ticket holders), we had to deal with ignorant staff members who would not let us pass by saying that we should go through the general entrance. We hopelessly showed the special media wristband. A woman the first time and a policeman the second insisted that the entry is only for vip holders, although there was a huge sign behind them proving us right. Eventually, with the intervention of more informed staff members were we allowed to enter. That made a quite ugly impression to us having to encounter with such untrained staff, especially after 11 years of flawless experience. On the other hand, there was a ton of things that made this festival memorable. Superb weather, fantastic line up, 83 acts, 5 stages, our mood at its best, what else does anyone need in order to spend four days of absolute fun? In our notes we count 24 acts that we have been able to attend even for a little while, because some coincided with other interesting acts so we had to split the time.

RICHIE BLACKMORE’S RAINBOW: what’s needed to say here … what kind of words could describe The Legend of Legends …. The singer Ronny Romero, who Ritchie chose as the voice to his melodies, was extraordinary and he, together with the band in excellent form, traveled us back to the great times of Rainbow and Deep Purple. For us it was a life dream fulfilled. Richie was at top form, even when he was reprimanding his band!

DEF LEPPARD: Standard value … A party … the sexiest band of the planet, even though the members are in their 60’s, gave us their rhythm and moves and we sang and danced and wanted even more and more …

KISS: They were the final act of this year’s festival. The band is very popular in Sweden, so it was expected that there would be full house. The show was spectacular with laser, pyro, confetti, elevators and zip lines, making the audience cheer, but to our ears the years have taken their toll and the lip singing doesn’t help either.

On the other hand, there were bands that gave us goosebumps and lots lots of fun. ZZ TOP, Styx, Saxon, UFO and Magnum are bands that are sure to entertain and excite. Joe Lynn Turner gave not only an honest show but also a touching one. Disturbed gave a very emotional performance. Powerwolf is an ultimate live band with their amazing show, especially with the keyboardist once again in a crazy mood. Axel Rudi Pell with Johnny Gioeli’s beautiful voice to accompany him and Bobby Rodinelli himself on the drums, Demons and Wizards with hits of Iced Earth and Blind Guardian, Blackberry Smoke, FM, Demon, Easy Action, The Night Flight Orchestra and Thundermother, all left us with the best impressions. Krokus were quite satisfactory, except for the bitter taste we were left with since they didn’t include Tokyo Nights in their setlist. One more disappointing performance, in our opinion, was Skid Row who made us leave the concert after a while with their totally indifferent show. We could say that they are just a tribute band now (and not so good either).

Τhere were three acts that were a little more special.

The Gathering of Kings is a “supergroup” with no less than six different amazing singers: Björn Stridh (Soilwork, The Night flight Orchestra), Rick Altzi (Masterplan), Tobias Jansson (The Law, Saffire), Alexander Frisborg (The Divine Baze Orchestra), Jens Westin (Corroded) and “our own” Apollo Papathanasio (Spiritual Beggars, ex-Firewind), alternating over the stage in superb compositions, such as Forever and a day, Love Will Stay Alive, Passing Rain and Out Of My Life.

Beast in Black with also our own Giannis Papadopoulos and his EPIC vocals , made the crowds party although it was relatively early in the festival day.

And finally, Hammerfall. In addition to an extraordinary live, this voice of Joacim Cans is like a knife in the heart in the good sense of course. Τhey gave us the new hymn of SWEDEN ROCK FESTIVAL, singing their new song entitled Sweden Rock for the first time. In the beginning on the video walls, as a video, and at the end live together with some lucky ones who were on stage together with the band. It made us go crazy and jump up and down. For the record, the lyrics do not deal with the festival itself but with the Swedish rock / metal scene in general but the title is more than enough for us all the “SRFers” to make it our hymn!

A yet another fantastic Sweden rock festival, despite its problems, is history leaving us with the same sweet taste and wish as every year to be healthy and strong to return to the holy grounds for one more time!

Until next year then, keep on rocking!