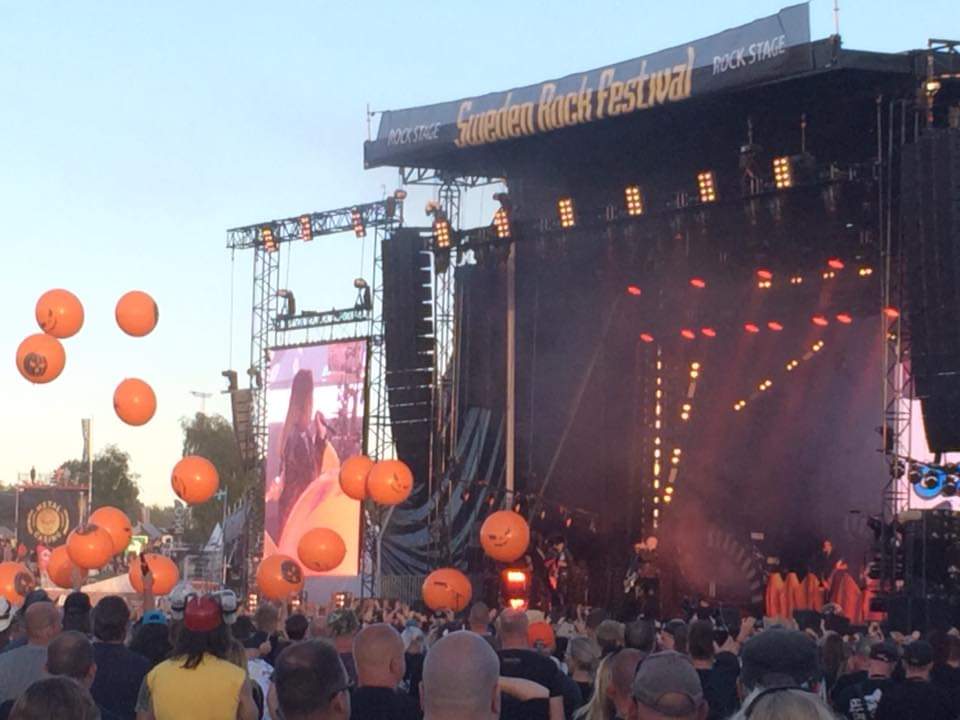 It may have been 4 months since SWEDEN ROCK FESTIVAL 2018 that took place from 7 to 10 of June, but the memories are still fresh. Several obligations, but mainly the national tragedy that hit our country this summer, did not allow us to write anything earlier. Now that time has passed we thought it was not fair not to write a few words about the best SRF ever, since we started attending it in 2008. And if not the best one, surely it’s in the top 3. There are 3 main reasons for it.

First, the weather. It was the best conditions we ever experienced in Sweden. No rain, not even a single cloud to worry us. To tell you the truth, we ended up praying for some clouds or a breeze to cool down because the sun was burning and the temperatures were unusual for the country. Do not forget that the concerts start at 11:30 in the morning and the sun does not go down before 21:30 or 22:00 in the evening! The only negative thing in all of this was that there was too much dust in the air at the festival area, which at some moments could have annoyed people with respiratory problems. However, no one focused on the negatives, everyone just enjoyed the unusually amazing weather.

Second, the quality of the whole venture. Although in 2017 we experienced a lot of problems, the technical services this year were greatly improved. The sound was a lot better and in general all the concerts provided a perfect technical result. In fact, it was better, not only than 2017, but also older ones.

Third and, of course, most important, the line-up of this year’s event. Last year, when the name LIVE NATION got into festival things, we suspected that something good would happen, unless they wanted to change the style of the particular festival completely, something that would be destructive, I believe. That obviously did not happen so they showed us their teeth quite early with the first announcement about the first headliner. We were speechless yet we celebrated by being informed that after so much waiting, IRON MAIDEN will set foot on the holy grounds of Norje… What happened at this year’s SRF with IRON MAIDEN’s announcement was unique. Tickets vanished within 3-4 days. Some VIP packages were down to few but they were also sold out very quickly. The same thing happened later when, after a few months, the one-day tickets became available! With one word: MADNESS! Of course, the big names did not stop there: OZZY, JUDAS PRIEST, HELLOWEEN and other 79 bands (among them our own ROTTING CHRIST) one better than the other.

Highlights of this year’s festival, except of the names mentioned above  (with IRON MAIDEN being the absolute kings not only by name but also with the great spectacle they gave us) included GLENN HUGHES, URIAH HEEP, PRETTY MAIDS, THE QUIREBOYS, STRATOVARIUS, LACUNA COIL , PAIN, NAZARETH and HEAT. The last ones did not satisfy us that much, probably because they played immediately after the sweeping IRON MAIDEN, so there wasn’t enough strength to watch anything else and secondly due to the setlist they chose with lots of our favorite tracks out (we adore them anyhow). Nice (very nice) surprise THE DARK ELEMENT, which is the new band of Anette Olzon, the former singer of Nightwish, who gave us a very good result by singing songs by the band’s guitarist, who was none other than Jani Liimatainen,  former guitarist of SONATA ARCTICA! In addition to the good result, Mrs. Olzon has also solved a big mystery that had been in our minds for years. And that is why Nightwish does not appear in SRF anymore. Well, according to their former singer the band themselves do not want it. The truth of course is known only to them and to the festival bookers. We surely hope this isn’t true and we hope to see (our) favorite band perform in this fantastic celebration of music!

We will not tire you any longer. We will close as always with the wish to be back to one of Europe’s finest rock / metal festivals, (the countdown OF COURSE has already begun) and we certainly wish that for you too.

Keep on rocking and dreaming!

Rock On The Range...