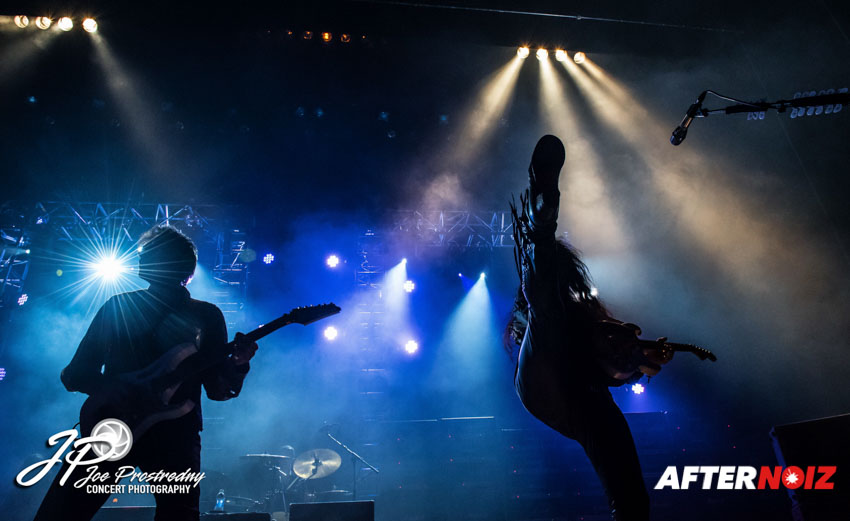 Generation Axe. It was humbly billed as “A Night of Guitars”. But what it really was… was five well known and extremely talented guitarists that took us through an intense three hour journey of light and sound that was beyond surreal. The amount of talent gathered for this was beyond compare: Steve Vai, Yngwie Malmsteen, Zakk Wilde, Nuno Bettencourt, and Tosin Abasi! They are currently on a 26 city tour of North America and I was able to catch them at the Warner Theater in Washington DC. The tour was designed for each guitarist to play a set of songs in their typical style with some onstage collaborations between and after the sets. All the guitarists were backed by the same support band, with Pete Griffin on bass (Zappa plays Zappa), Nick Marinovich on keys (Yngwie Malmsteen band), and Matt Garstka on drums (Animals as Leaders).

The show began as all five guitarists hit the stage with a hard and heavy rendition of Boston’s “Foreplay” which gave the audience a taste of what was come over the next several hours! At the end of the song, Steve Vai greeted the audience and introduced the first guitarist to play for us that night: Tosin Abasi. Tosin is best known for his work with the instrumental progressive metal band, “Animals as Leaders”. Tosin played four Animals as Leaders songs on his signature 8 string guitars, including “Tempting Time”, “Air Chrysalis” and “The Woven Web”. Nuno Bettencourt joined Tosin on “Physical Education”; the final song of his set. Tosin was extremely fascinating to watch as his fingers took full advantage of everything that 8 strings had to offer. It was truly mesmerizing.

After the audience applause for Tosin, Nuno dove right into his set. He has a fairly extensive resume, but seems to be best known for his work with the rock band “Extreme”. Nuno ramped up the onstage energy with his first song: Extreme’s “Get the Funk Out”. He brought the energy back down for a bit with a stunning, seated, acoustic performance of “Midnight Express” before cranking it back up again with an electric version of “Flight of the Wounded Bumblebee”. Next up was a medley of multiple songs that Nuno claimed he found on You Tube as a “best of compilation” that a fan of his had put together. Nuno’s final song of his set was the Citizen Cope cover, “Sideways”, during which he was joined on stage by the next guitar master: Zakk Wilde! Nuno was the guitarist I was the least familiar with prior to this show, but I really enjoyed his energetic set.

Zakk’s set began as soon as Nuno said his goodbyes to the audience. Zakk is best known for his decades as Ozzy Osbourne’s lead guitarist and for his own band: “Black Label Society”. To start things off, Zakk delivered a crushing version of Black Sabbath’s N.I.B., which just happens to be my favorite Sabbath song, ever! This was followed by a rendition of Jimi Hendrix’s “Hey Joe”, and The Allman Brothers band’s “Whipping Post”. All songs contained multiple heavy solos, including an episode where Zakk jumped down into the theater and travelled up and down both aisles to make sure all the audience members got to see him shred up close and personal. Zakk also introduced the support musicians during his set in a very comical way. He implied the drummer, Matt, was actually a homeless person they found on the streets, whom they lured into coming on tour with the promise of a free T shirt and all the porn he could watch.   Zakk’s set was the only set where there was no overlap with the next guitarist…. Yngwie Malmsteen.

Yngwie is the one guitarist of the bunch that I have followed most closely over the years, all the way back to his early albums. I’ve seen him perform multiple times, but it has been over a decade since a saw him last. Yngwie is a master of a fast, frantic, yet precise style of guitar playing that he pretty much invented over 3 decades ago. The style is a meshing of classical music, rock, and metal that has always been spellbinding to me. Yngwie put on a multiple song set where one song just seemed to meld into the next. I kind of lost track of what was all played, but there were portions of “Spellbound”, “Into Valhalla”, “Icarus Dream Suite”, and “Far Beyond the Sun”. Yngwie’s performance was filled with all the guitar slinging, high kicking, and “guitar god posing” antics for which he is well known. The only downside to his set, was the lighting. Everyone else had very stunning light shows. Yngwie was constantly bathed in and orange or yellow light that I felt detracted from the overall presentation (and also made for poor photo opportunities). Yngwie rounded out his set with “Black Star”, during which he was joined onstage by the final guitarist of the night… Steve Vai.

Steve Vai has been a prominent fixture in the guitar world for over three decades. From his early work with David Lee Roth and Whitesnake, to his multiple phenomenal solo albums, Steve has given us a career filled with fantastic music. To me he seemed to be the most versatile of the bunch, and it is an absolute joy to see and hear him play. Unlike Zakk and Yngwie, who seem to put there guitars through a great degree of physical abuse to produce their signature sounds, Steve treats his more like a lover, gently caressing out the chords in a stunning fashion. Steve’s songs included: “Now We Run”, “Tender Surrender”, and “Gravity Storm”. To round out the solo sets, he was joined back on stage by Tosin for his final song, “Building the Church”.

Following Steve’s solo set, Steve and Tosin were joined onstage by Nuno and Zakk for massively heavy rendition of Edgar Winter’s “Frankenstein”. I have always loved that song and it was absolutely thrilling to finally see it performed live… especially by this group of talent. I thought it was a bit odd that Yngwie was the only guitarist not present for this song, but this was consistent throughout the tour, so there must have been some reason for it. Yngwie did rejoin the other four for the final song of the night: Deep Purple’s “Highway Star”! Yngwie actually sang the vocals for this song and despite the fact that vocals aren’t really his “thing”, he did a pretty good job.

After the final bows, I looked at my watch and realized the show had gone over three hours… the time had just flown by. It was a great night showcasing massive guitar talent across several styles… just phenomenal! The tour is likely over, or nearly over at the time of this publication, but these guys aren’t going anywhere! If you ever have the chance to see them… as a group… or individually… DO NOT miss it!!!