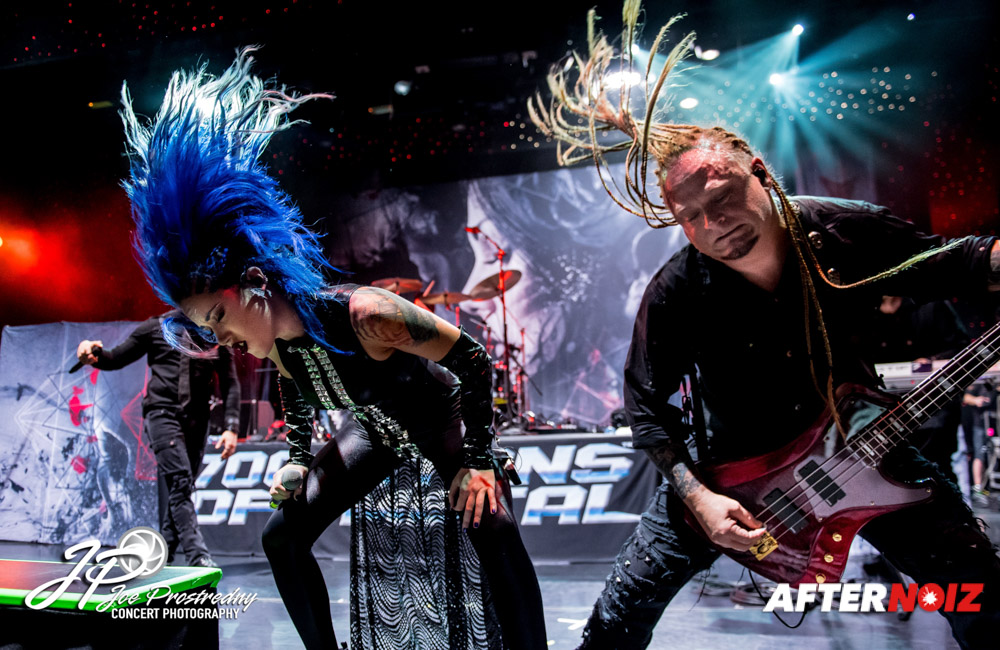 Dammit!!!………..  It’s 6:30am and I’m wide awake… Just a little over 3 hours since I went to bed.   The excitement of the cruise is still getting the better of me and I can’t sleep despite extreme exhaustion.  After about an hour of unsuccessfully trying to fall back to sleep, I gave it up, got a shower, and headed to the Windjammer for breakfast.  I always try to eat a big slow relaxed breakfast on the cruise as it is the only meal where I don’t feel I’m rushing to the next show.  Next, I headed up to the pool deck to check out the construction of the Pool Deck stage.  Last year, things were running behind and the first band or two had to be rescheduled for a later time.  This year, things seemed to be running on time…. But when 10 am rolled around… they weren’t quite ready.  Stam1na was the first band scheduled to play on the Pool Deck and I was ready and waiting for their set.  But after 25 minutes with no band hitting the stage, I headed off to the Alhambra to see a great set by Mors Principium Est instead.

After that I ran back up to the pool deck to see if Stam1na ever went on.  I turns out they did, but I missed them, as they had just finished their last song when I got there.  Suffocation was up next on the pool deck, so I decided to hang out and catch their set next.  Despite there being very few clouds in the sky, it started to rain when they performed the song “Jesus Wept”, which I personally found a little eerie.  Then it was a trip back downstairs for some German power metal with Orden Ogan.   Then back up the steps I went for some medieval metal with the band Saltatio Mortis.  The band’s name is in Latin and roughly translates to “dance of death”.  Despite having never heard of them before, I was extremely entertained by this band as I love metal played with nontraditional metal instruments such as bag pipes and hurdy-gurdys.  They were really fun live, and I’d love to see them again!

One of the hard things about attending 70000 Tons as press, is that your time is not completely your own.  During the afternoon, I had an interview scheduled with Oliver Palotai of Kamelot and had an Arch Enemy press conference to attend (see my interview and press conference summary on Afternoiz.com).  This combined with several band meet and greets that I wanted to attend caused me to miss several bands that I wanted to see perform that afternoon.  But, again, this cruise is all about choices, meet your favorite bands, or watch them perform.  Every band on the cruise does a meet and greet for fans that want to see them.  This year, all of the meet and greets were scheduled on Day 2.  I personally did Meet and Greets with Amaranthe, Equilibrium, Kamelot, and Arch Enemy.  But between those, the interview, and the press conference, I missed sets by Orphaned Land, Xandria, Haggard, Avatarium, and Therion….  Sigh….

There were also multiple “listening parties” going on all day on Day 2.  Several bands with upcoming album releases have premier listening parties for cruisers that might want to hear their albums before they are released to the public.  Bands premiering their albums this year included: Axxis, Dying Fetus, Overkill, Trollfest, Striker, and Edenbridge.  In addition, Arch Enemy premiered portions of their upcoming live concert DVD entitled “As the Stages Burn”.  I elected to skip these this year to avoid missing other things… choices….  But I did get to see portions of Arch Enemy’s DVD during the press conference.

By early evening, I was ready to hit the shows again and headed back to the pool deck for some awesome Brazilian power metal with Angra.  Then it was back down to the lower levels at the Alhambra for some classic thrash metal by Overkill.  And then…. Yes, be prepared for a lot of stairs and/or elevators on this cruise….  it was back up to the pool deck it for some classic Finnish metal with Amorphis.  It was a great trio of shows to start the evening, but at this point hunger got the better of me (I had forgotten to eat lunch) and I went in search of food.  I, yet again, didn’t make it to one of the dining halls, but instead headed to the Windjammer buffet for a quick dinner.

After receiving enough sustenance to bring my blood sugar back to a level high enough to maintain consciousness, I headed back to the Alhambra for an absolutely stunning set by Kamelot.  Kamelot has a reputation for “borrowing” very talented vocalists from other bands to sing back up on their albums and on their tours.  Several of these vocalists were on this year’s cruise with their own bands, and fans were hopeful we’d see some of them on stage.  Well, we got our wish as both Alissa White-Gluz of Arch Enemy and Elize Ryd of Amaranthe both performed with Kamelot on several the songs.  At this point it was after midnight and despite my earlier dinner, consciousness was fading fast.  But I did manage to remain on my feet to catch one final set with the gothic doom metal band Draconian… and it was definitely worth staying up for!!

By the time I crawled back to my room, it was 2 am and I was asleep almost before I hit the bed.  There would be no sleeping in because I had an early morning excursion in Haiti…. The Dragon’s Breath zip line was calling!  So, I actually set an alarm.  Maybe I’d get a little more sleep than the three hours or so I’d gotten on the first night…. Maybe….