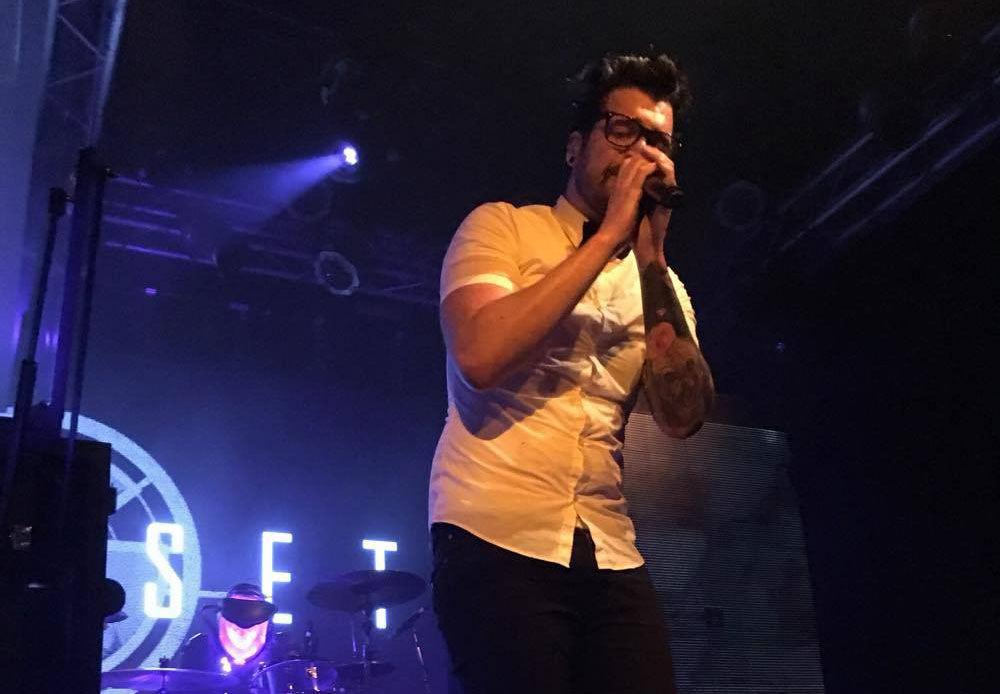 So, you get to the concert early to reserve your spot on the rail and you have to wait through all of those opening bands that sometimes — let’s be honest — make you want to fall asleep. It’s lame, but the best is yet to come, right? Well, every once in a while you find an opening band that is a true gem.

A few years back, I was attending a Lacuna Coil concert. The opening band was Starset, a band I had never heard of before and didn’t bother looking into. I took my spot on the rail after camping out all day and, to my curiosity, the stage had a giant computer screen on it. My interest was piqued. The room went dark and, soon enough, instrument-clad space men infiltrated the stage. Immediately, I was captivated by their sound. That night, I became a fan.

Fast forward to October 7th, 2016. Their first headline show ever. There I was, front and center. My friend and I acquired VIP passes in addition to our tickets. For $50.00, we had access to an intimate pre-show acoustic set (about 5 songs), meet and greet signing, photos, and early entry to the venue. Nowadays, that’s a really good deal. The bandmates were all very down to earth and willing to talk to their fans. They struck me as the types who are just looking for a chuckle and a good time.

After, my friend and I secured our spots on the rail and we didn’t have to wait long for the opening band. They were called Gambit. I had never heard of them before, but they were okay. The microphone sound was pretty bad and I couldn’t hear anything the vocalist sang, unfortunately. However, I’ve found that to be the norm when you’re up front.

Finally, the time had come. For the past half hour I had watched them set up their computer screen plus two other screens. Clearly, they were going all out. There was no barricade and I was leaning on the very stage Starset would be rocking out on. The lights went out and I could feel the excitement rise within me. The intro music played, and out they came, opening with “Rise and Fall.” I had already known that they’d be playing their album, Transmissions, in its entirety, but it still exhilarated me to behold each song unfolding before my eyes and ears. They ended their set with their most well known song, “My Demons,” and Dustin invited us to sing along with him, which we did all too willingly.

My only problem with their set was that it was only 45 minutes long. It still contained all 12 songs; however, I’m greedy, as most fans are. Transmissions came out in 2014, so we are overdue for some new tunes. Some people yelled “Encore! Encore!” but there could not be an encore because Starset does not have any other music. Yet. Dustin revealed a few bits of information during their set. He confessed that the music that was playing right before their set began was a snippet of new music! And no one even knew it! I willed my ears to remember what it sounded like, but I couldn’t! Also, he stated that the record would be finished in two weeks; however, that is not the release date of the new album. Perhaps wanting to toy with our emotions, Dustin did not state a specific release date.

After the show, I made my way over to the merchandise table. I only made one purchase: a book. The book is called “The Prox Transmissions” and it states that it is “The official novel commissioned by the Starset Society.” From what I have gathered, they wrote this book to shed more light onto their music and the society itself. The society has a mysterious tone to it, but I’ve deduced that it’s a society devoted to shedding light on the danger technology could pose to our world due to misuse. It is definitely an interesting read so far, so grab a copy on Kindle.

I am awe-struck at how dedicated this band is to their cause and how intelligent they are. Overall, the night, however short, was exactly what the doctor ordered. Good music, good company, and a good time.