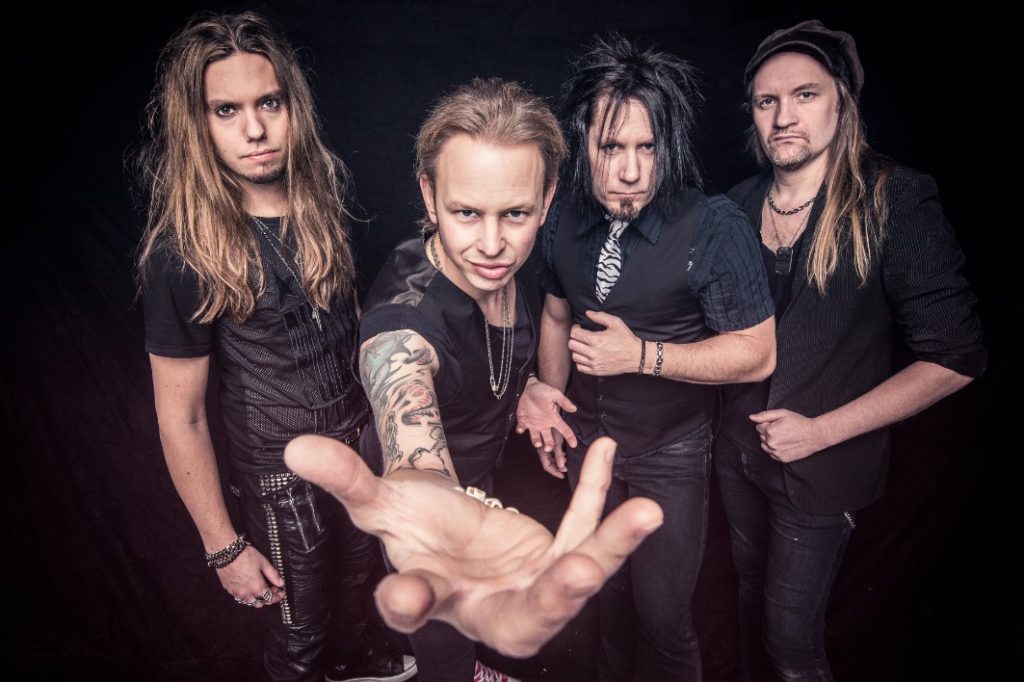 S. Welcome to Afternoiz!
M. Thanx for having us!S. So, we would like to know you a bit better before your live show in Athens, Greece, on January 30th. So, you started 20 years ago. Do you remember how things were back then and what inspired you to start and still inspires you to go on?

M. The desire was always the passion for rock music. Still is. It’s what we chose to do with our lives. Back then it was harder climate for this kind of music. It was so out of fashion and uncool. Now it seems more accepted.

S. Although the great success didn’t come early, do you think that the ideal time it happened was with the album “Bleed & Scream”?

M. It’s hard to say exactly when. But it’s been a constant progress and we’ve grown with every album. Something happens when you got a big back catalogue.

S. Do you think that your sound has changed over the years?

M. Absolutely. We started copying other bands. And gradually we started to develop our own sound. We still try to explore new sounds and styles and We haven’t stopped evolving.

S. Would you care to try something different? Maybe adding a new instrument to your sound, one you have never thought about before?

M. If the song would require it, yes.
Not just for the sake of doing something new, but If it would work for the song, absolutely.

S. Let’s go back to 2016 and your participation in the Melodifestivalen contest. How was that experience? Would you do it again?

M. It was a lot of fun and a big learning experience in every way, but we wouldn’t do it again. However, we don’t regret doing it. Not many people get to do a thing like that so we’re thankful for that experience.

S. Could you put your albums in order of preference? Do you feel that there is a favorite and a least favorite album?

M. I like all the albums except the first 2.
Therefore, I won’t include them here.
“Are you ready to rock” A solid album classic rock style. You can easily hear our influences from Whitesnake, Europe, Mr Big etc. That album was a lot of fun making. Still like it very much.

“Bleed and scream” That’s where we really found our own sound. Maybe the heaviest Eclipse so far. Very guitar and riff-driven album. We’re very proud of the this one.

“Armageddonize” Continued in the same style but had a few more commercial trax on it. A lot of things started to happen for us after releasing this album.

“Monumentum” Basically, a continuation of Armageddonize. Very versatile album. The heaviness of Black rain & Vertigo.
The folkish Downfall of Eden, and the pop oriented Jaded & Hurt.

“Paradigm” Also a very versatile album. We have discovered some new sounds and styles on this one as well. Like the dark twang sound on Viva la Victoria and Blood wants blood. The country elements of United. I think it’s the most solid of all our releases.

S. Was there any awkward or funny moment on stage so far?

M. Nothing awkward really, but watching Victor on stage is always funny. He’s a beast on stage.

S. In 2019 the album “Paradigm” was released. Could you tell us about it? What was the inspiration for this monumental work?

M. We just worked harder on that album. We knew we had to refreshen our sound. It was time for that. The only way to do that is to spend more time working on it basically.

Then it wouldn’t be a secret would it?

*If you want to read the Greek version, press here.

An interview with Kari Rueslåtten

Interview: Talks about God and Music with Nero Kane

An interview with Kari...